her purr is weak, but her heart is strong 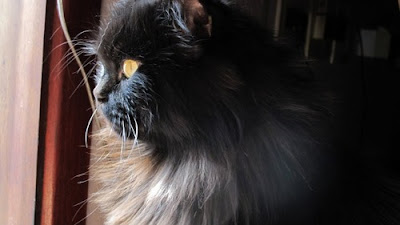 hey everyone. Today was extremely hard. I had to put my 18 year old cat asleep because her body was shutting down, and it hit me so hard:( she was such a little scardy cat. her name was SPOOKY! how cute huh? my mom was clever when she gave her that name, the exact same year i was born. We literally grew up together, even though she was a cat, i felt a really close connection to her. she never let me pet her because she was scared but in the past few months she let me touch her…pet her, love her, scratch her cute little ears and hear her purr and finally, i came to realize “maybe she trusts me now. maybe she knows shes not going to be around much longer and she gave me a shot?” I’ll never know, since i dont speak to cats lol but i do know that she finally let me love her. following my new camera purchase i regret not taking any more pictures of her besides the one at the top here.I was going to take one last picture of her today but If she was a human I don’t think she would of appreciated a picture of herself while she was sick…she was such a girly girl cat if that makes sense. she would be far to embarrassed since the sickness was overcoming. at the animal hospital today i was present with my mother as spooky received the injection. I never witnessed somethings life just slip away so easily, quietly, and peacefully. considering she was a classy cat, the injection entered her body and she glanced up and me and my mom as if she was saying “it’s okay, it’s going to be okay. i love you” then she began to close her glossy eyes and rest her head on her paw, very beautifully. it brought me to tears because she was such a outstanding cat, and she ultimately became apart of the family. Rest In Peace my precious and beautiful spooky. you will be greatly missed. xoxo Adam